The Qigong Institute Commentary on “Mind-Body and Relaxation Research Focus” collection by Nova Science Publishers, Inc. (www.novapublishers.com) discusses the fundamental problems with the current western medical model and suggests initiatives for researching and promoting Qigong as a primary health modality.

How Scientific Is Modern Medicine

Doctors today commonly assert that they practice "scientific medicine," and patients think that the medical treatments they receive are "scientifically proven." However, this ideal is a dream, not reality, and a clever and profitable marketing ruse, not fact. The British Medical Journal's "Clinical Evidence" analyzed common medical treatments to evaluate which are supported by sufficient reliable evidence (BMJ, 2007). They reviewed approximately 2,500 treatments and found:

• 13 percent were found to be beneficial

• 23 percent were likely to be beneficial

• Eight percent were as likely to be harmful as beneficial

• Six percent were unlikely to be beneficial

• Four percent were likely to be harmful or ineffective.

• 46 percent were unknown whether they were efficacious or harmful

In the late 1970s, the US government conducted a similar evaluation and found a strikingly similar result. They found that only 10 percent to 20 percent of medical treatment had evidence of efficacy ('Assessing the Efficacy and Safety of Medical Technologies' - Office of Technology Assessment, 1978). How Scientific Is Modern Medicine Really?

The World Health Organization reports that the "evidence base" for standard western medical practice is as follows:

In other words, at least 50% of current western medical practice has no evidence base.

Most Practice Guideline Recommendations Based on Less-Than-Ideal Quality of Evidence. A study published in the January issue of Mayo Clinic Proceedings shows that most clinical practice guidelines for interventional procedures (e.g., bronchoscopy, angioplasty) are based on lower-quality medical evidence and fail to disclose authors’ conflicts of interest.

The selective reporting of Randomized Controlled Trials results in a biased "evidence base" for modern western medicine. The best evidence shows that half of all the clinical trials ever conducted and completed on the treatments in use today have never been published in academic journals. Trials with positive or flattering results, unsurprisingly, are about twice as likely to be published — and this is true for both academic research and industry studies.

Breaking the Seal on Drug Research. Researchers are pushing Big Pharma to disclose all clinical results -- and not just those that make it look good.

Preventative Medicine - The Cure for the Health Care Crisis

United States health care costs stem from an over-dependence on high-tech allopathic medicine and pharmaceuticals that treat symptoms; the bureaucracy and paper work of dealing with numerous insurance companies; the threat of malpractice lawsuits; and greed. The current US health care system is set up to make profits for investors rather than to heal… [we] must accept responsibility for our health by making health-promoting choices daily and seeking true preventative care that assists the body's innate healing ability. Therapies other than drugs and surgery need to be available through Medicare and insurance plans… The current system in the US depends upon sickness and high-tech solutions in order to make a profit. Our very economy is dependent upon the health care industry as it now stands. A November 2006 article in BusinessWeekOnline says that '…health care has become the main American job program for the 21st century, replacing, at least for the moment, all the other industries that are vanishing from the landscape.' " Robert J. Zieve, MD in The Townsend Letter (www.townsendletter.com) - February/March 2007. In his book Beyond the Medical Meltdown

, Zieve discusses the factors contributing to the high cost of US health care.

. The authors describe myths about the health-care system that conceal the real problems and emphasize the failure to promote preventive care: "[the] reimbursement system often penalizes appropriate care by underpaying for essential preventive care services. Providers get paid much more for treating more serious and expensive medical problems than they do for effective preventive medicine." They also confirm the lack of evidence to support many standard medical practices and prescriptions.

Escape Fire: The Fight to Rescue American Healthcare - YouTube Trailer (4:01). This documentary tackles one of the most pressing issues of our time: what can be done to save our broken healthcare system? The film examines the powerful forces trying to maintain the status quo in a medical industry designed for quick fixes rather than prevention, for profit-driven care rather than patient-driven care. After decades of resistance, a movement to bring innovative high-touch, low-cost methods of prevention and healing into our high-tech, costly system is finally gaining ground. Escape Fire shows how our healthcare system is wasting trillions of dollars by over using drug and surgical solutions, while profoundly under using mind-body wholistic health options.

The Politics and Manipulation of Medicine

The attack on non-allopathic, energy-based forms of medicine by the American Medical Assocation, mainstream Western medicine, the pharmaceutical industry, and others started with the Flexner Report in 1910.

Flexner was John D. Rockefeller's "stool pigeon" in setting up the takeover of the entire medical school industry by Carnegie Foundation, which was a Rockefeller Foundation subsidiary at that time.......When you say "Carnegie Foundation", you're talking about something that has no substance. It's entirely under the domination of the Rockefellers. .................He (Abraham Flexner) did "The Flexner Report", and this changed the medical schools of the United States from homeopathic, naturopathic medicine, to allopathic medicine -- which was a German school of medicine which depended on the heavy use of drugs, radical surgery, and long hospital stays. That's what we've got today, allopathic medicine.---Eustace Mullins. [Interview 2003] by Tom Valentine

The Flexner Report: How John D. Rockefeller Used the AMA to Take Over Western Medicine

Why is modern medicine so drug intensive? What is the history behind this development? Watch the video - Episode 1: The True History of Chemotherapy & the Pharmaceutical Monopoly.

Persecution of Innovative Therapies. - Politics in Healing: The Suppression and Manipulation of American Medicine.

The Cancer Cure That Worked: 50 Years of Suppression

See Also: 'The Politics of Medicine and the Nature of Health' in The Rife Handbook of Frequency Therapy and Holistic Health

. This includes facts and fallacies about clinical trials; preventable deaths; how drugs are marketed and publicized; the relationships between the pharmaceutical Industry and the United States Government, government officials, and universities; how drugs are approved; drugs in our drinking water and antibiotics in our food; and effects of psychotropic drugs on children.

Society’s focus on disease is bad for our health

One of the difficulties in writing about wellness and prevention is that our health-care system — in fact, our whole society — is focused on disease. Television shows like House M.D. and ER show dramatic, extreme examples of patients with life-threatening problems. Wellness care just isn’t that dramatic. I doubt there will ever be a TV drama about the chiropractic patient who didn’t need back surgery because of his care, and also didn’t get an ulcer because he was able to stop taking his ibuprofen. Or about the acupuncturist who saved a patient from a hysterectomy because the treatment balanced her hormones naturally. True wellness and prevention restore health and function without serious side effects, or causing other health problems. When a person’s overall health is restored, seemingly unrelated conditions may resolve.

Discussion of the current delivery of medicine, chronic illnesses in children, and the myriad issues with vaccines and prescription drugs. And more.

The Misuse of Prescription Drugs in the Delivery of Healthcare 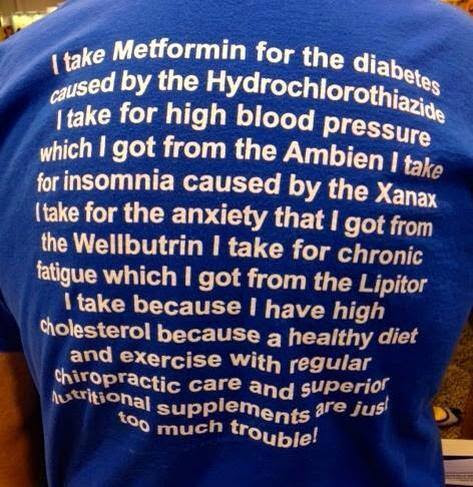 Pfizer Gives Details on Payments to Doctors. Pfizer, the world’s largest drug maker, said Wednesday that it paid about $20 million to 4,500 doctors and other medical professionals for consulting and speaking on its behalf in the last six months of 2009. Pfizer also paid $15.3 million to 250 academic medical centers and other research groups for clinical trials in the same period.

Database on Doctors and Patients Aids Drug Company Targeted Marketing. In the old days, sales representatives from drug companies would chat up local pharmacists to learn what drugs doctors were prescribing. Now such shoulder-rubbing is becoming a quaint memory — thanks to vast databases of patient and doctor information being used by pharmaceutical companies to market drugs.

"Using prescription drugs to silence a body's symptoms enables us to ignore personal involvement we may have with the onset of those symptoms. The overuse of prescription drugs provides a vacation from personal responsibility." Bruce Lipton: Biology of Belief

David Anderson, a professor of biology at the California Institute of Technology compares drugs’ effects to a sloppy oil change. If you dump a gallon of oil over your car’s engine, some of it will dribble into the right place, but a lot of it will end up doing more harm than good.

How to Work with the Immune System